olive47 wants to save your over-stimulated soul. Currently centering her work in the neighborhoods of Los Angeles, this street artist, printmaker, illustrator, toy designer, (and sometimes cult leader) is on a mission to bring a calm to the chaos of modern living. Taking cues from the psychology of kawaii, and the beautiful, yet gothic appreciation of the nature that permeated her southern upbringing, olive47 seeks to create a sense of unique familiarity in the imagery that inhabits her work in an attempt to deliver the viewer into a more well-adjusted state of being through the visual dialogues created in her imagery.

She was once rumoured to be the bastard daughter of Tammy Faye Bakker, and her friends tell her she’s a good dancer.

olive47 is a street artist/muralist/printmaker born in Chattanooga TN sometime in the 70’s. She received her BFA from SCAD and MFA from Camberwell College of the Arts in London UK. She recently moved back to Los Angeles after 9 years living in London and Atlanta, where she was a featured muralist in the Living Walls 2012 conference. In 2009, she released Miss Cupcake, the award-winning vinyl artist platform toy and and subsequent DIY, available internationally.

She has exhibited in solo and group shows at venues such as Nelson Street Gallery(ATL), Breeze Block Gallery (Portland OR), Gabba Gallery (Los Angeles) and San Diego Comic Con. Her colour-filled naturescapes can be seen in numerous street art/graffiti blogs and publications; and her work is held in the permanent collections of The Victoria and Albert Museum andThe Centennial Olympic Parks Dept. Her heroes are Buckminster Fuller, Joseph Campbell, Prince, and David Bowie. 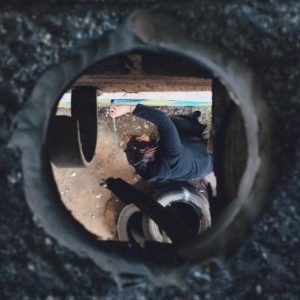